Kim Hyung-joong talks about his current situation, 17 years after his debut, and his relentless quest.

We interviewed Kim Hyun Joong, who just finished his show “22/23 KIM HYUN JOONG WORLD TOUR <The end of a dream> in Japan.

We asked him about this concert, which was his first meeting with Japanese fans in two and a half years, as well as the type of intentions and convictions he has carried out until today.
What are his impressions of Japanese fans and the music scene?
He also talked about his new song “Song for a dreamer,” which is an insert song for the movie “Violent Action,” as well as his favorite Japanese anime and manga.

-You just finished “22/23 KIM HYUN JOONG WORLD TOUR <The end of a dream> in Japan,” your concert in Japan at Pacifico Yokohama, how did you feel about this concert?

It was the first time in two and a half years that I was able to hold a concert in Japan, and I was really grateful that my fans remembered me and came there, and that they accepted Kim Hyun’s music. Joong as she is now. Above all, I could feel the love from everyone, and I think it was time for me to confess and promise my musical future.

-What did the two and a half years that separated your reunion with your Japanese fans mean to you?

During these two and a half years, I had a mixture of emotions. When the new corona outbreak started, I thought it would be over soon, and I didn’t think I couldn’t see everyone for so long, but the situation got worse and worse, and I was worried of not being able to see you again…….. I was tormented and sometimes weakened mentally. I’m sure my fans felt the same way. But when I found everyone on the stage and shared the same moment with them with an open heart, I felt “Oh, I see”. These two and a half years have strengthened our feelings for each other. This must have been the time to strengthen our ties,” I realized. The time we didn’t see each other wasn’t in vain.

-What kind of presence do these fans, whom you reunited with after so long, have in your mind now?

If I hadn’t had my Japanese fans, I certainly wouldn’t be the Kim Hyung-jun I am today. You have all made me the artist I am today. That’s why, as I told Pacifico Yokohama, I want to protect my fans from now on.
I want to live my life with this sense of mission. That’s why I would like to deliver a message that will give you more hope than ever, and I would like to continue to do better activities, not just in music, so that I can provide more opportunities to meet my fans.

-By the way, what is your impression of the Japanese music scene?

I think the presence of Japan, which is a big music market, as a neighboring country has had a big influence on the growth of the Korean music scene.
Japan has a thriving band scene, a thriving idol scene, and a market for classical and jazz music.
There is a very detailed division of genres, and there is a group of enthusiasts who love each type of music, and there are many festivals for these enthusiasts, which are well organized, and there are many large halls of concert.

I really love Japanese music since my childhood, starting with X JAPAN back then, and recently I listened a lot to One Ok Rock and Hagedan (Official Bearded Man-dism).
I think the reason why such iconic bands representing Japan are constantly popping up in Japan is that they are backed by a strong music market.

-M. Kim is also active in the Japanese music scene, and I realized this year that it’s been 17 years since he debuted. What do you think of your life as an artist and musician?

Seventeen years have passed!
When I look back at my journey up to yesterday, I tell myself that I’ve run a lot and accomplished a lot, but now I feel like I’m back on the starting line. So if I have another opportunity to be interviewed like this in 17 years, I would like to be able to talk more deeply about music, and I would like to be a senior who can give various advice to my juniors.
I would like and hope to continue to be active and work hard in music at this time.

I think the new corona is not just a disease, but a disease that has terrified the whole world.
Now that we have recovered from the corona disaster, I think everyone, not just me, feels like we are starting a second life.
So I feel like I’m living a new life every day as I’m here being interviewed.

-What do you think is the reason why you were able to remain active for so long despite the unprecedented crisis of the Corona disaster?

I think it’s because I love music.
If I didn’t like the music, I wouldn’t have been able to stay active for 17 years, and I think I was able to go that long because my fans supported my music.

-Your musical life can be divided into two periods: the group period and the solo period.
What do you think are the main differences between these activities?

I think people sometimes feel like you’re lonely when you’re working alone, but when I’m actually working as a solo artist, I don’t even have time to think about feeling alone (laughs ).
There are five times more things to do than in a group. (Laughs.)
That’s why I have a great sense of accomplishment, and I really like being able to make my own music.
In that sense, solo activities suit me better, and I’m happy about that.

– You’re also an actor, aren’t you?
What do you think of the balance between your activities as an actor and a musician?

I think acting is also a really fascinating profession. In this sense, I consider myself lucky to be able to evolve between the two fields of theater and music.
It is a great advantage for me to have these two options. However, it’s very difficult to master just one, and I think it takes a lot of dedication in the sense that you can’t neglect either one.
Raising each of them to the level of a professional requires careful choices.
So even though I haven’t worked as an actor for a while, it’s because I’m fully dedicated to Kim Hyung-joon as a singer, and when I perform again, I want to fully devote myself to the interpretation so that fans of Kim Hyung-joon as a singer feel unique[?]. I want to aim high.

-Do you have an ideal image that you seek as a singer and as an actor, respectively?

As a singer, I want to bring joy and hope to many people through music. For example, I want to be an artist who can sing and perform songs that people around the world can relate to, like Coldplay.
I think this is the most ideal image of Kim Hyun Joong that I should aim for. However, as an actor, Kim Hyung-jun has different ideas, and I want to actively play roles that don’t look like Kim Hyung-jun at all.
I want to be an actor who can step into sometimes selfish or cruel roles, which I can’t imagine from the usual Kim Hyung-joon.

-What kind of expressive person do you feel you are now?

-Kim’s long-awaited new work, “Song for a dreamer”, has just been released. This song was written as an insert song for the movie “Violent Action”.
How does it feel to be involved in a work based on a Japanese manga?

Japan is a major country when it comes to animation and manga, both in name and in reality, even from a global point of view. So I also have a collection of Japanese manga, which starts with “Dragon Ball” and ends with “Blade of the Demon”, and I grew up watching a lot of Japanese anime.
Anecdotally, I was very saddened when Kentaro Miura, who wrote my favorite “Berserk”, died midway through the series. But when I learned that his friend, the mangaka Tsuneji Mori, was going to continue the serial publication of “Berserk”, I thought to myself that he would bring this work to a solid conclusion.
I thought, “It’s a wonderful thing. I respect Japanese manga and anime, including the love that these manga artists have for their works. So to be invited to participate in the film ‘Violent Action’, which is based on a Japanese manga, is a very strange thing for me. It’s a dream come true for me to be part of this movie.

-As the song is an insert song for the movie “Violent Action”, which is based on a Japanese manga, “Song for a dreamer” is heard together with the songs of [Alexandros] and MAN WITH A MISSION, who also participated in this film. What do you think of this situation?

MAN WITH A MISSION is a band of my generation that was active around the same time as me, so I’ve paid attention to them since their debut. I thought they were “unusual” because they performed like wolves, but I also thought they “made great music”.
I was very moved to have the opportunity to work with such people on the film “Violent Action” and to see Japanese listeners listen with me to “Song for a dreamer”.
As someone who grew up listening to Japanese music, I’m very happy to be able to work with Japanese artists of the same generation.
For example, Perfume and I debuted on the same day, and I’m happy to see them still active today. I always wanted to have the chance to meet these people who went through the same era as me.
So I dream of one day being able to perform with them at a major Japanese festival such as “Summer Sonic”, where we could engage in friendly musical competition.

-How do you hope Japanese listeners will enjoy your new album “Song for a dreamer”, which is also a big step towards this dream?

The title track “Song for a dreamer” is the only ballad in the film “Violent Action”. Hope you enjoy the rock star vibe of the other song, “Super Fire”. I also hope that through this new album, “Song for a dreamer”, everyone can see the potential of Kim Hyung Joon’s abilities as a group.

-Finally, tell us about your dreams and goals for the future.

I want to be on a bigger stage, but at the same time I also want to take care of the smaller stages. Small stages that I want to cherish are, for example, surprise shows for our fans and live house shows where we can be closer to our fans.
We would like to increase the number of these shows. And a bigger stage would be a dream stage, a full-scale live concert in an arena or dome.
I would like to be a singer and an artist who can do both things at the same time. 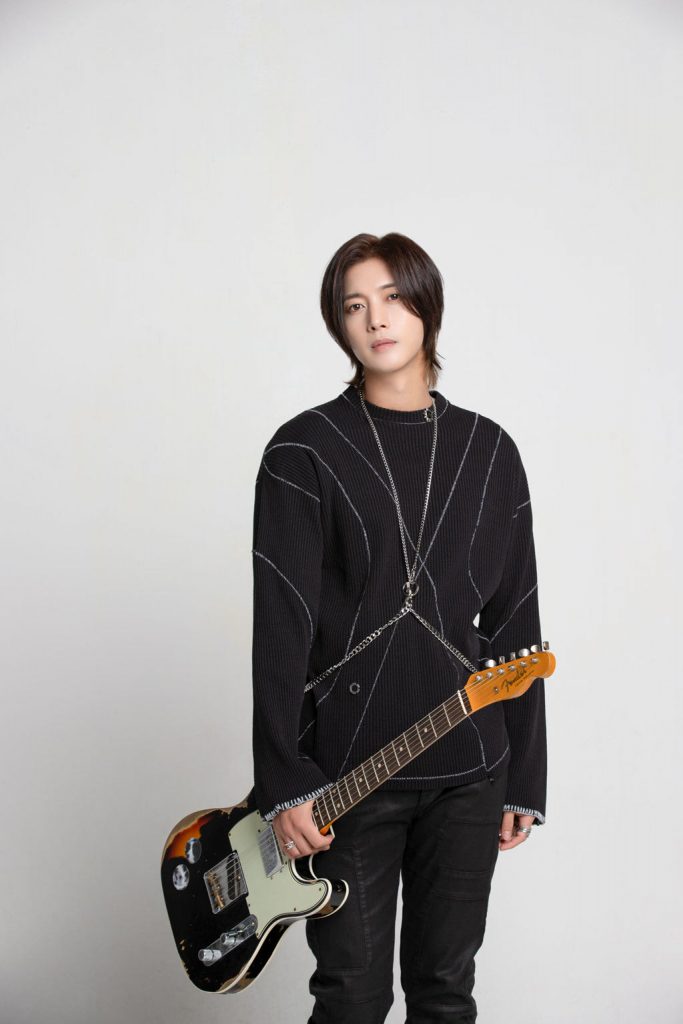