No time to change.

Barely out of the Peruvian concert at the Arena in Lima, Kim Hyun Joong embarked for Laz Paz in Bolivia where he was received by a large welcoming committee at the gates of the hotel. 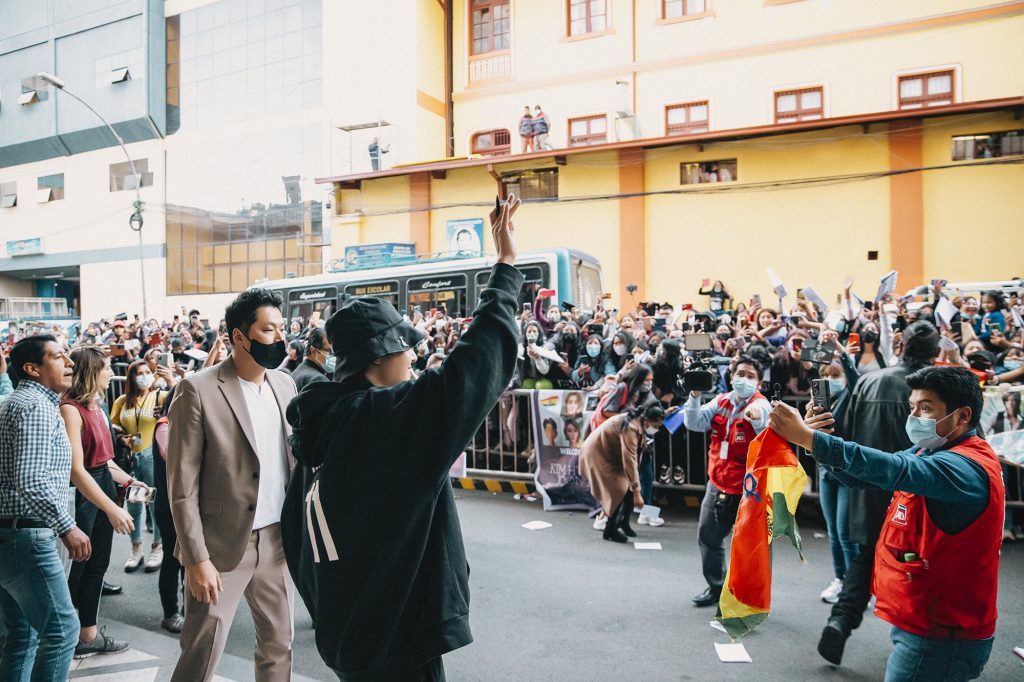 The time for a few smiles to the crowd (and what a smile!) He then put on his prettiest black suit to honor an invitation to a press conference with Bolivian journalists who had been warned some time before. 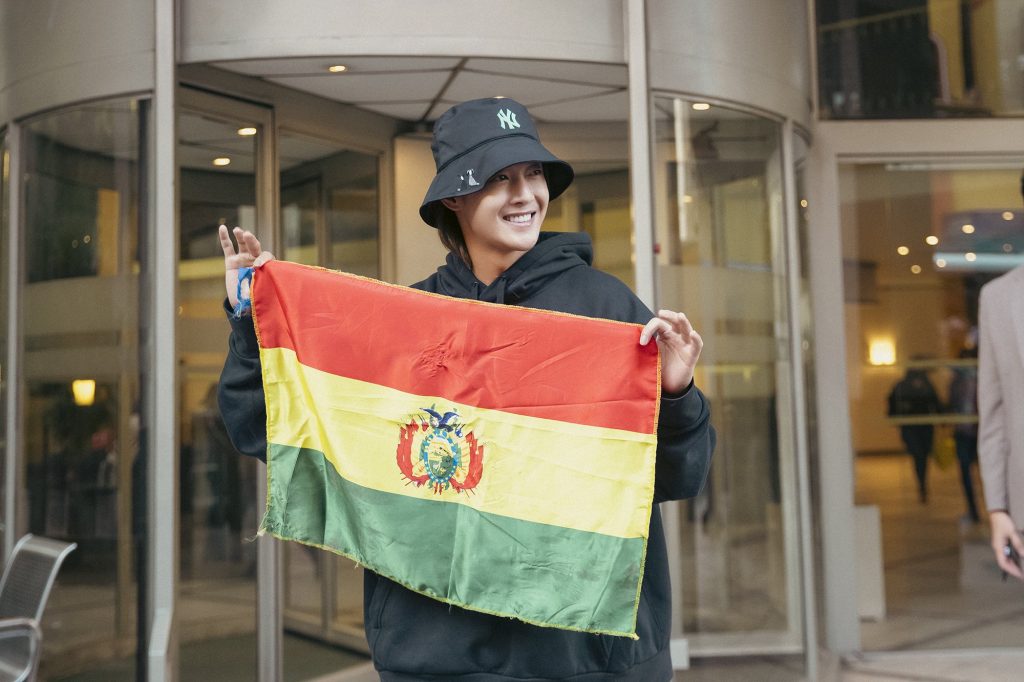 Did you say press conference?

We don’t know at all in what state of mind he went there, but we bet he must have had a little thought about the last one in which he participated on the occasion of When Time Stopped series release ;    a real ambush and organized media lynching, where he had been the victim of a horde of hateful journalists more interested in his personal life than in his acting career or the work he was trying to promote.

Yesterday everything went perfectly, and a deputy named Sarah Crespo even presented him with an award from the Plurinational Legislative Assembly (Bolivian parliament), something that looks like an award for “exemplarity with young people”

“ The work of this young artist stands out, his work touches thousands of people. He is an example to follow and we recognize him ,” she said. 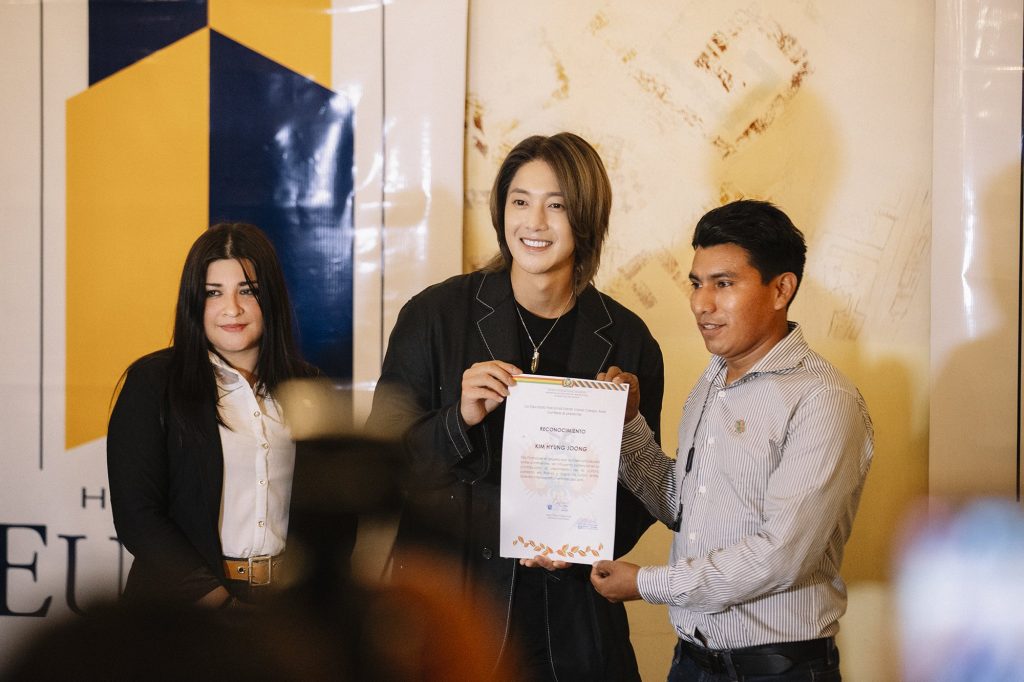 When asked “what do you think of Bolivian fans”, he replied that Latin American fans in general were very different from Asian fans.

He said it was his third visit to Bolivia and he is increasingly impressed with Bolivian culture.

He confirmed that he will perform his best repertoire at the Don Bosco Coliseum tonight 06.10.2022, just opposite the Hotel Europa where the conference was held, and that he will save a little time to perform some visits.

“I want to visit areas that I have already visited and new ones, which are with graffiti and urban art .”

He also confessed that he wanted to know the Salar de Uyuni (in the Andes, in the south-west of Bolivia, the largest expanse of salt in the world, a desert landscape of almost 11,000 km² composed of brilliant white salt – see images of our Youtube shorts from yesterday)

” What I like the most in Bolivia are the landscapes it has, it also has clean air, that’s why it’s one of my dreams to come and enjoy it.”

It is difficult for me to visit them often because of the distance and because I can suffer from altitude sickness. But I always keep in mind the great love and passion of my fans ,” he said again.

Acute mountain sickness occurs when climbing too quickly in altitude, Laz Paz is 4,061 meters above sea level; the airport is called El Alto.

Generally this altitude sickness appears in the first hours spent at the new altitude.
Due to the lack of oxygen it can cause headaches and fatigue, but also insomnia, loss of appetite, nausea and 🤮and at very high altitudes can cause other pathologies more serious.

For those who were wondering about Bitna’s Instagram post that photographed oxygen cylinders, it should be explained that she also felt unwell during the last visit to Bolivia.

This time it seems that one have made sure to prepare for any eventuality so that everything goes as well as possible.

We leave you with one last irresistible photo, and it doesn’t matter if we deserve eternal punishment for our weakness.

Look at this cute smile of which only Kim Hyun Joong has the secret, doubled here with a mischievous look able to damn all the saints of Paradise.

Forgive him Lord it’s not his fault, he doesn’t know what he’s doing.
Amen. 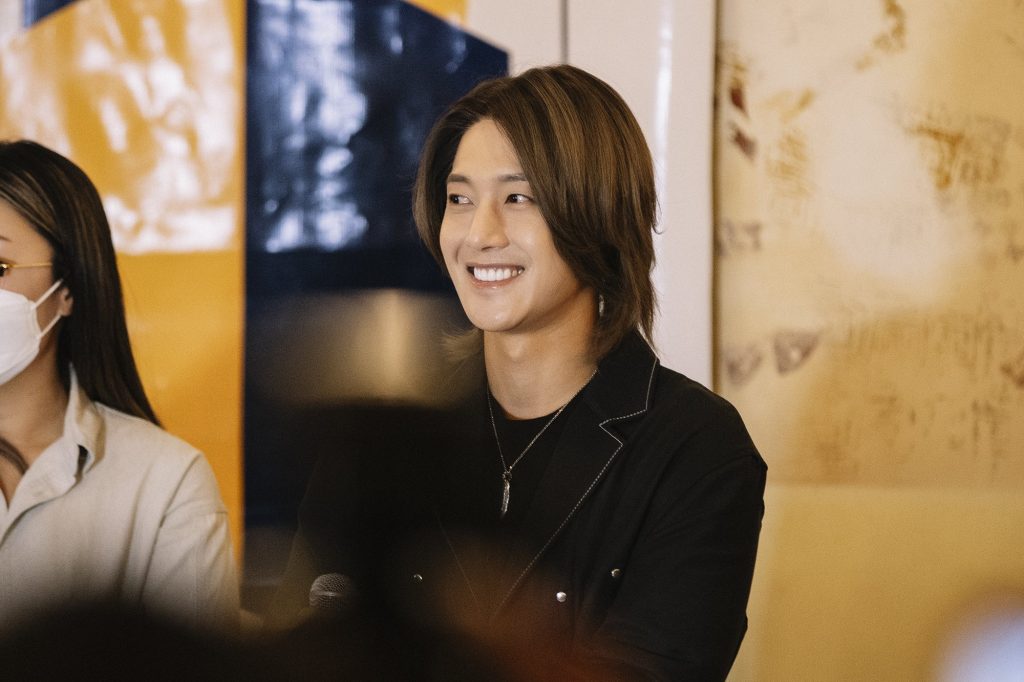 Credits  to their respective owners.

The singer confirmed that this is his third time in Bolivia and that he is increasingly impressed with our culture. He confirmed that he will offer his best repertoire at the Coliseum of the Don Bosco school. #KIMHYUNJOONG pic.twitter.com/l6KLNRtfkP