Kim Hyun Joong at the cinema ! 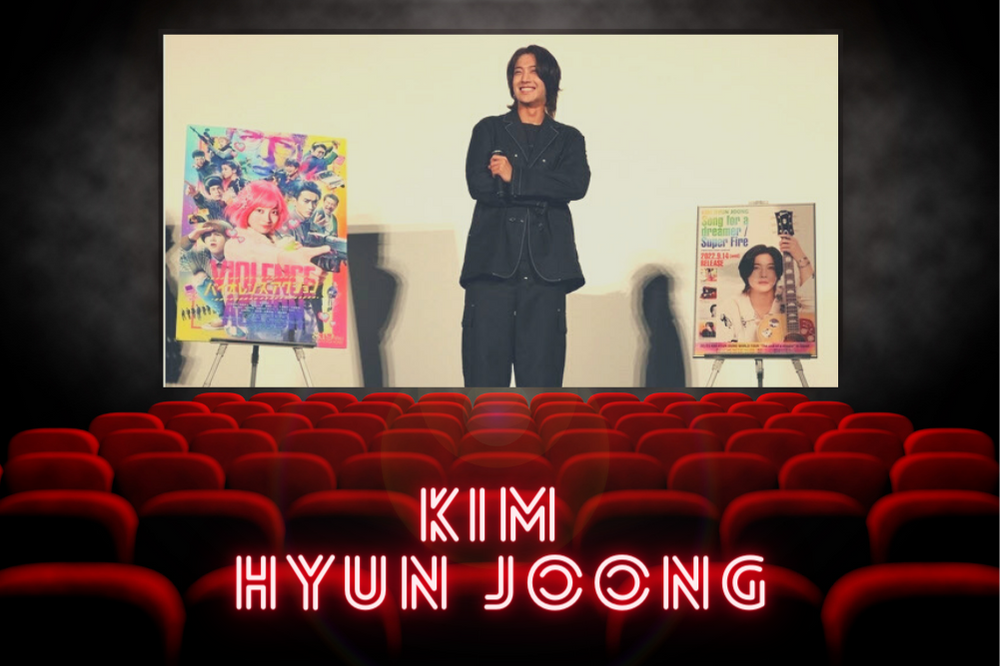 Nowadays when you blink in Japan we very quickly get a gale in the opposite hemisphere.

It seems to be the butterfly effect. 🤔
Or the greenhouse effect? 😏

Well, it’s not quite exactly that, but we’re happy to live in our time, because even when it’s not LIVE broadcasts we’re pretty sure that the information will reach us a few hours later and that we will know exactly what is happening in a movie theater in Tokyo.

Progress is great, isn’t it?

Here are some translated excerpts from the transcripts and the transcription author’s comments regarding Kim Hyun Joong’s intervention during the presentation of the single ” Song For Dreamer ” in Japan.

@kikakhj  has kindly translated and put it online for our greatest pleasure, and we thank her for her thoughtfulness as it allows the rest of the world to participate a little bit in the event as well.

👇👇👇👇
@kikakhj
–
🎥
KIKA: Since we came on a hot day, he told us that after the movie was over, he would offer cold drinks to the 250 people present.
Probably for operational reasons this did not happen, but this sweet concern for his fans made us really happy.

🎥
KHJ: “I think I’m blessed to have received talents (music, theater, etc.) that have many different options.
I believe that if you all take care of yourself and keep running towards your dreams, good things will happen to you.”

🎥
Question to KHJ: If you were asked to do film music again, would you do it?
KHJ: “Of course I will if I’m offered, and I’ll be working hard on my job next year so that I can be on stage not only as a singer but also as an actor, so please please expect that.”

🎥
2-2
Question to KHJ: What feelings did you put into this song 〜Song for a dreamer?
KHJ: It was created with the hope that if we, like the main character of this film, take slow steps towards our dreams, we will achieve them one day.

Kika: Then he sang a bit of Song for a dreamer a cappella♫

2-1
Question to KHJ: What feelings did you put into this song〜Song for a dreamer?
KHJ: At first, there was no info about the movie except the name of the lead actress.
I looked at all the works that she created.
Supporting his life and that of the film’s main character together.

🎥
[Toyosu Talk Event]
HJ said he was unable to get longer concert dates due to his visa, and he was sorry that it seemed irresponsible to leave before the CD was released. at this moment. He asked for great PR support on the day the CD was released.

🎥
Question to KHJ: Where do you want to go next time you come to Japan?
KHJ: Tamachi
KIKA: This is where HJ started his life in Japan. There is a Korean restaurant in an alley that Hyun Joong frequents.
KHJ: “When you go to the restaurant, if the poster has changed to someone else’s, please take it down.”

🎥
Questions from 3 fans: What was the best food in Japan this time around?
N°2 Sukiya
N°1 A bottle of wine from a fan, tried for the first time.

Question from a fan: When will you do your next concert or fanmeeting in Japan?

KHJ: Hopefully later in the year, around Christmas.

🎥
Question to KHJ: Is there anything you want to do in Japan?
KHJ: “Eat Sukiya’s beef balls! I just had some.”
MC: “How was it?”
KHJ: “(Sigh) The price got a little higher. The normal size also changed. I was a little disappointed…”

KIKA:
When the speaking time came to an end, MC was about to close.
HJ said he could talk a bit more with the fans.
He spoke to the Japan staff in Korean, and HJ himself had fun pointing it out with a mischievous face.

🎥
HJ become a singer who could sing “adult aesthetic”.
KHJ: I feel like I can’t grow up easily. My body is growing, but not my mentality. In fact, I’m irritated by the noise (from the man behind), I hope you continue to love me as much as this pure boy.

KIKA: If you look at the list of artists who sang in the movie, they’re all amazing artists that you can only see at Summer Sonic and so on.
He said he hopes to one day be on the same Summer Sonic stage as these performers.

🎥
As they were talking on stage, the booming voice of an old man on the landing behind them interrupted their conversation over the loudspeaker.
MC: Should I go claim it?
KHJ: That’s alright. I will speak louder.
(Speaks softer&Laughs)
There’s no need to fight. He works too!”

🎥
As HJ talks a lot about MDs…
MC: “It almost looks like a Dongdaemun merchant!” [EN: one of the many popular markets in Seoul]
KHJ: “That’s not true. I think Dongdaemun is expensive these days.
I have a formal contract with a Chinese seller, so I can deliver good quality goods from now on!”

🎥
Question: Did you work on MD this time around?
KHJ: With COVID, I started drawing as a hobby and for relaxation and making products (lots of explanation).
I came to have a very feminine hobby.
On top of that, no design cost is needed!
In the future, I want to sell more high quality and inexpensive products.

🎥
Question: How is Latin America? I heard it was hot… not just the temperature but also the hearts of the fans.
HJ: I think LATMA fans have a different atmosphere in different countries. Very different from Japan.
I guess even if you tell them not to raise their voices, they will.

🎥
Question: Your world tour will continue, right?
KHJ: “Starting with Japan, then South America, North America, and then when the COVID situation is more stable, I plan to tour Asia.”

🎥
MC: In the past, when he went to Myeongdong, he saw a lot of Japanese people, but now there aren’t any.
KHJ: “There will be a lot of good things if you come to Seoul after COVID has calmed down.
Myeongdong people have learned to appreciate tourists…they will give you discounts and be nice to you!”

🎥
KIKA: KHJ said he’s not good at SRS but when he was on Instagram, today’s MC’s account popped up, so he cheered up and messaged him , but then he didn’t know how to find his account, so he couldn’t read the long answer from the MC😅💦.