Kim Hyun Joong : Has arrived in Chile and is doing well 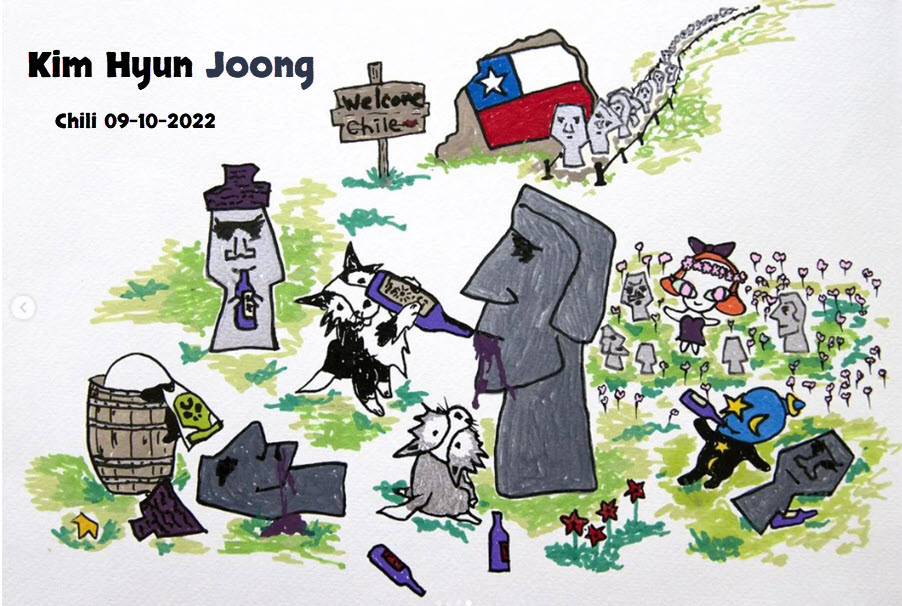 For those who would have been a little worried to see the whole team disembarking at the airport in Chile without Kim Hyun Joong, we can be reassured that he has arrived safely and his sense of humor is completely intact.

Because it seemed he was a little unwell, he quietly left for the hotel.

Maybe he had had enough of people banging his head with cell phones or trying to rip one of his hands off as he passed.

It must be said that he gave his all at the concert in Bolivia and boarded a plane directly for Chile.

Kim Hyun Joong may have taken the opportunity to rest or to visit more discreetly on his side and also to draw which is a good sign, isn’t it?

Hilarious drawing where even the statues of Easter Island seem to be lining up for tomorrow’s concert.

” Chilean wine is delicious ” okay, but wouldn’t it also be a bit too strong?😂

We counted six bottles!
Of course, there are several “beings” drinking in this drawing, but… moderation if you don’t want to have your head in your socks tomorrow at the concert. 🤣

Finally, this last date on the Latin American calendar, Chile!!!!
I think people are relaxed and free in Chile.
I feel quite relieved even though I stay still.
The Moai statue I would like to see, although it is in a far away area, T_T… But when I arrived in Chile, I wanted to feel the Moai statue. KKK
Dear fans of Henecia in Chile, we will prepare the final show tomorrow.
I’ll spill it all without regret, so see you tomorrow~ ♡
In Chile, the wine is also delicious.