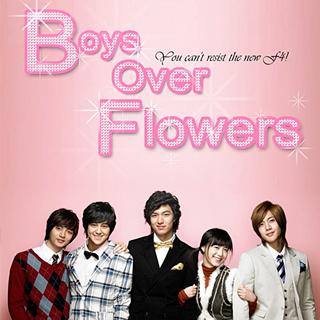 Synopsis:
A young middle class girl attends the elite Institute Shin Hwa High after receiving a grant for studies. She is the victim of harassment by the head of the F4 (the four richest boys) that she rejects. He is attracted to her but she has a crush on his best friend. Who will she choose?

“Also known by the name Boys Before Flowers), is a South Korean television series in 25 episodes around 65 minutes long based on the successful Hana yori dango by the writer Yoko Kamio (Jp).

This title refers to Flower Boys, thus called owing to their beauty. It captures the whole plot of this series that traces the evolution of these Flower Boys who at first may be reduced to a visual aspect, but who will become real men with hearts and feelings.

This metaphor of the flower also explains the name of the young girl who is the source of this transformation. Jan Di, is a homonym of the word meaning lawn in Korean»